11 Consequences of Misclassifying Your 1099 Contractors

The classification of 1099 contractors and W-2 employees has emerged as one of the biggest storylines within the booming freelance economy. According to the ADP Research Institute, more than one-third of midsize businesses have been fined or penalized for not complying with laws pertaining to how they manage their workforces.

The cost of non-compliance can be staggering. Fines levied by the U.S. Department of Labor (DOL), IRS and state agencies for worker misclassification can exceed millions depending on the severity of the infractions. The threat of class action lawsuits should also serve as a further deterrent for companies straddling the boundaries of improper classification.

As more and more companies begin leveraging independent contractors, it’s paramount that HR executives and CHROs and are armed with all the information they need to mitigate compliance risk and properly classify their workers. The following is a list of some of the consequences of misclassifying a worker as an independent contractor. While this isn’t an exhaustive list, this should be sufficient to highlight the critical need for companies to take proper steps to ensure their contractors and employees are properly classified.

Employers will be held liable for failure to pay overtime and minimum wage under the federal Fair Labor Standards Act (FLSA) and applicable state wage laws. The statute of limitations for a wage claim under the FLSA is 2 years for a non-willful violation and 3 years for a willful violation. (“Willful” means the employer was knowingly violating the law, or was lax in properly understanding and complying with its legal obligations.)

Both criminal penalties and liability for back wages may be levied against employers and executives found in violation of FLSA laws. This is an area of intense focus by the DOL and auditors have been added just to assure that employees are not violating the law in classifying workers as independent contractors.

The potential liability exposure for companies that misclassify employees is huge. Employers found in violation may incur massive penalties, including unpaid overtime costs and minimum wage deficits – costs that may be equaled by liquidated damages and attorney’s fees.

Penalties may be levied for failing to withhold state and federal payroll taxes, including failure to make matching social security and medicare tax payments.

Employers may be held liable for failure to comply with federal I-9 requirements. Employers are obligated to keep properly filled out I-9s for each of its employees, including common law employees who are determined to have been misclassified as independent contractors. The DOL targets specific industries such as construction, home healthcare, warehousing and poultry processing where labor might not be closely controlled.

Penalties for failure to pay the appropriate amount of money to the state unemployment insurance funds, which can be retroactive. The issue typically is whether the Employer’s Quarterly Wage List and Employer’s Contribution Report submitted by the employer to Workforce Services accurately report the number of employees, because these are the reports the contribution rate is based upon.

Potential entitlement of misclassified independent contractors to coverage under the company’s employee benefit plans, including pension and other retirement plans, health insurance, paid leave, severance pay, etc. This is also a very hot enforcement area, the subject of a number of lawsuits and has the potential for tremendous liability.

Failure to provide coverage under state and federal anti-discrimination laws for those improperly classified as independent contractors.

Liability exposure for failure to provide leave and reinstatement to eligible employees under the federal Family and Medical Leave Act (FMLA) and other leave entitlement laws.

Violations of reinstatement and leave rights for military personnel under USERRA.

Failure to count misclassified workers in determining federal WARN Act compliance obligations in the event of mass layoffs and plant closings, and failure to give required WARN notices to affected misclassified employees.

Potential invalidation of Releases and Waivers of employees 40 and older for failure to give accurate statistical information required under the Older Worker’s Benefit Protection Act.

The Bottom line: You Can’t Afford To Misclassify

The misclassification of workers has significant impact on a number of levels: The individual worker, the employer, and the economy at large. At the same time, the independent contractor ranks rise, as more workers elect to control how they engage for work. No single factor determines misclassification, making the complexities of worker status even more arduous to manage. The DOL rarely loses a misclassification case; don’t take chances when utilizing this valuable talent pool.

To learn more about best practices for properly managing your extended workforce, download our "Classification 101" whitepaper. 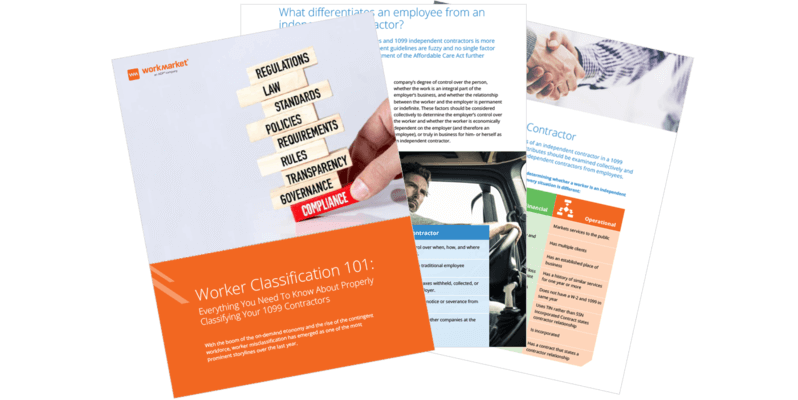 How One California Company Adjusted to New Freelance Ruling