Did you know the on-demand labor market is exploding, just growing like crazy? A lot of that is based on the below datapoint. 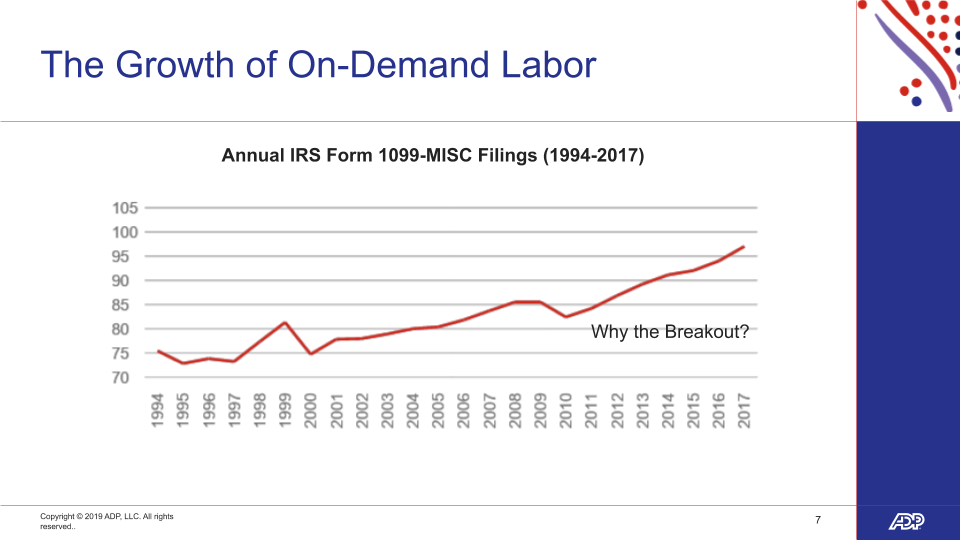 The number of 1099s has increased tremendously, leading a lot of people to say that the on-demand economy is exploding. I’d like to try and convince you otherwise – there is NO explosion in the on-demand economy. While it’s been a large part of the labor force over the last couple of generations and is growing, it’s doing so very slowly and steadily. So, how do we explain this data source?

One of the most prominent explanations of this “on-demand labor market explosion” is the consumer usage of 1099s. How many times have you used Uber in the last week or month? Uber is on our phones, it’s on the front pages, and it’s driving a lot of this conversation. People talk about the “uberization of work.” Uber generates millions of 1099s.

If you have a dog, do you use a dog walker, and if so, do you pay them in cash, or perhaps via Venmo or PayPal? At the end of the year, do you issue them a 1099? Most people don’t. But apps like Rover and Wag do. That is moving something from the great market economy into the formal economy. Structural change in the labor force? No. But HUGE movements in data. These are just a few examples of things that have helped propel this, as well as a slight increase in the actual amount of 1099 labor.

Sizing Up the On-Demand Labor Economy $600B to $1T is the estimated spend – a BIG gap. But, that’s because 60% of the spend is unaccounted for. This is because when we ask in surveys: How many 1099s do you use? How much do you spend on 1099s? Who manages the 1099s? The number one answer is, “I don’t know.” While WorkMarket has helped change that, unfortunately not every company uses us… yet!

Only about 25-30% of the labor force today is on-demand. This “contingent workforce” includes independent contractors, freelancers, people in the temp industry, etc. These individuals are not in a company’s payroll system, but rather they’re the people doing work for your company or your client’s company. This number was about the same in 2010… and even in 2000 (when the Bureau of Labor Statistics did a real study on this). In 2010, literally everyone (even McKinsey) was predicting that by 2020, 50% of the labor force would be on-demand. There’s this general notion that the percentage of the labor force that declares themselves self-employed is growing – that all jobs created since the Great Recession have been in the on-demand economy. This number should have shot up, but it’s currently 7%. When this percentage started being tracked by the Bureau of Labor Statistics in 1970, it was 8%. 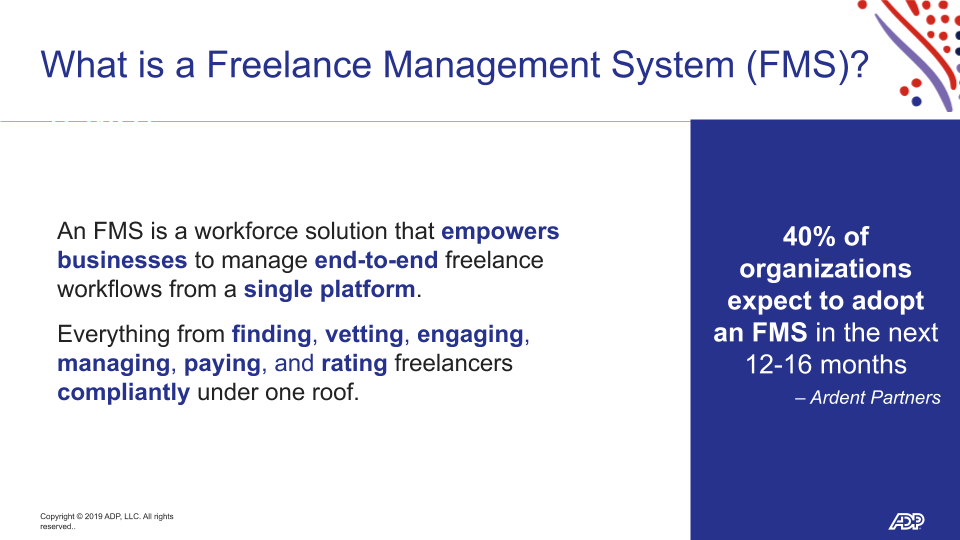 These two things are driving companies to rethink labor strategies.

What about that extended workforce of 1099 contractors and freelancers?

As you think about your clients and your business, here are some interesting stats/facts to keep in mind with regards to freelancers:

Worker comparison – as companies augment their workforce with freelancers, generally, they found they needed 14 freelancers to be ready at a moment’s notice to replace ONE full-time worker.

Utilization rates - the average person in a service environment is utilized 60% of the time, which means that 40% of the time, you are paying them to do nothing; freelancers are booked almost 100% of the time.

Freelancer performance – Freelancers perform better than full-time employees. Why? They show up on time more often, they get better satisfaction scores and are more engaged. This is because of the alignment of interest and transparency of data. Let’s say I’m Sally Jones and I work for Walgreens. It takes me three hours to install a sign that should’ve only taken an hour. But it was done poorly, and I have to go back and fix it. What’s going to happen to me? Probably nothing. I’d have to mess up a whole lot to lose my job. But, if Sally Jones was a freelancer and shows up late or doesn’t fix it in the time allotted, etc., she will have ratings on that assignment which will impact the algorithms and if she gets another job TOMORROW.

Myth - People have a general notion that millennials work more as freelancers or on-demand – not true. Data shows us that the demographics, age, and education level are all the same. However, typical W2 employee protections, such as healthcare coverage and retirement plans are significantly different.

Risk and Compliance and the Lack of Systemization

The Fair Labor Standards Act (FLSA) defines an employee as “any individual that is employed by an employer.” Huh? The labor regulatory landscape is complex, contradictory, and confusing – people don’t know what to do. That’s challenge #1.

Challenge #2 is organizing, managing, and paying that part of your labor force, efficiently and compliantly. It’s not just putting somebody into an HR management system.

None of this was systematized, and even worse, people just don’t know who’s an employee or who’s an independent contractor.

For example, big-name companies, like rideshare companies and delivery driver companies (e.g., Uber and FedEx), are getting involved in tens to hundreds of millions of dollar fines and settlements because they are engaging workers as what a regulatory authority perceives to be incorrect. None of those companies are setting out to screw those workers by seeing what they can do and get away with. They just think that what they were doing was correct (thinking those people were not employees). The problem is they did not have a good enough system to manage those people, so when someone came knocking on their door asking to see their freelancer engagement, they were like, “Uh, give us a month to pull all that data.” They didn’t have any rules they were following.

Best Practices: What You Should Be Thinking About Today

It’s all about compliance and efficiency – at some point, there will be a knock on the door. It’s not a question of if, but when. Some companies do not have an on-demand labor concept at all, which means they are not operating as flexibly as they could, and they are not meeting talent where it is, and it’s putting them at a disadvantage.

The most powerful trend right now in on-demand labor is using an on-demand labor force in the context of the people that have walked out of your door. Every company is facing some sort of “brain drain” – the Baby Boomer generation retiring, the skills gap, etc. Companies are struggling to find the workers they need to address the necessary skills in their workforce. Yet every day, they have people walking out their door with the skills that they’ve trained that have client knowledge, institutional knowledge, intellectual capital, and they are not staying in touch with those people to bring them back as potential re-hires, freelancers or temps.

It would be so easy and simple for companies that when their people walk out the door, to have them put into a freelance management system (FMS) to stay in touch with them. An FMS is a workforce solution that empowers businesses to manage end-to-end freelance workflows from a single platform – everything from finding, vetting, engaging, managing, paying, and rating freelancers compliantly under one roof. An FMS utilizes data basic structures to capture all of those people’s skills, all of the technology and clients they’ve worked with, and uses algorithms over those databases to say who worked on what, we have a problem with X and need a person to talk to Y. Having it be a mobile technology and available as an app allows companies to stay in direct contact with those people.

An FMS is becoming an incredibly important and necessary part of organizations’ enterprise resource planning systems. According to Ardent Partners, 40% of organizations will adopt an FMS in the next 12-16 months. Whether those organizations want to engage in an on-demand labor force or already have one, but want to know how to treat and engage with them, here are some things to consider if you’re going to be the employer of choice in the on-demand labor world:

Pay on time – don’t stretch payroll. If you don’t pay Joe Smith, Joe Smith can’t pay his rent. Those ratings that we talked about before? Employers get those too, and you better believe that freelancers are looking at those. Transparency goes both ways in the on-demand economy.

Scope of work – be clear. If you’re sending a job to Sally Jones – she likely only has her mobile phone telling her where to go or what to do. You don’t get the opportunity to have a direct meeting to talk through objectives. Sally is doing a specific job for you in a discreet way, and you need to be very specific about what it is she needs to do.

On-time approval – approve work on time. If it was agreed that you would pay Sally X amount within X amount of days, hen Sally submits her assignment for approval, make sure it is approved within the initial amount of days specified. It’s not fair for her to expect her to meet a deadline if you won’t too.

Reasonable work requirements – putting in a requirement that in order for someone to be given an assignment they need to be licensed, or hold a certain certification in order to perform that work is reasonable. Saying that they need $10M in general liability, $5M in crime, and a $10M E&O policy is unreasonable, but companies do that all the time, yet wonder why no one joins their labor cloud.

Include them in culture – some people think that if they do anything with Sally, like invite her to a company gathering, she will be viewed as a company employee. There are areas where you can include the on-demand labor force into your company culture and environment. You just have to be very restrictive about where you do it.

So, when your clients come to you for advice about what to do in joining the on-demand labor force, remember the three D’s:

Determine – determine the line, whatever it is. Maybe you only send $10,000 worth of work and no more, or only allow someone to work 29 hours per week, or only engage someone for 34 assignments per year. Whatever that line is, determine it.

Document – once you make the determination, document it in a company handbook. But the best place to document it is in software because then you can deliver an audit trail. That way, when you get the knock at the door (and you will), instead of saying, “I don’t know,” you’re going to go, “Here” and give them documentation with every single person you have engaged over the last X years – which is the 3rd “D,” Deliver.

Leveraging independent contractors can be a powerful way to address the growing talent shortage and control costs through agile teams and scalable labor strategies. As a strategic advisor, you can help your clients evaluate the use of contingent labor to drive business results, while also shining a light on the rogue spend and compliance issues that may already exist.